Slovak cuisine tastebud-tickling time. And this, primarily, for those who have been asking me about classic places to eat really good Slovak food in Bratislava Old Town.

On first examination, the question itself appears bizarre – what other kind of food would restaurants in the Slovak capital be serving up? Well, the current trend in the city centre seems to be leaning towards the international=cool approach. But traditional Slovak cuisine? More the domain of the old folks and the tourists (the old folks aren’t so bothered about gourmet, the attitude goes, and the tourists, ha, they can easily be conned into what constitutes good Slovak food), with the result that, outside of a few dingy krčmy (pubs) and a clutch of high-in-price, far-lower-in-quality joints around Hlavné námestie (the main square), really good typical Slovak restaurants are fairly elusive. 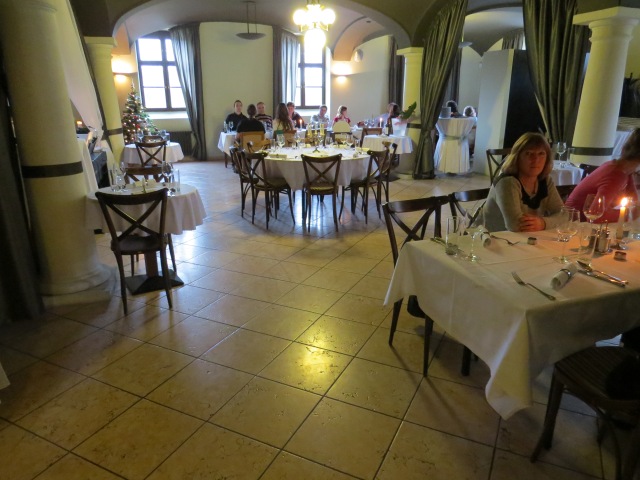 So, dearth of top-end Slovak cuisine-oriented restaurants revealed, it was both shocking and heartening to discover that one of the very best in Bratislava is actually situated right next to Bratislava Castle. Shocking because who expects a really good showcase for national cuisine right by one of the most touristy spots in the whole country? Heartening because – well – we know that however much we celebrate off-the-beaten-track places on this site, it’s those big attractions where foreign visitors often gravitate and if they do, we would much rather they had the option of seeking refreshment in a decent restaurant (we know it’s easy to resort to the fast food stand or conveniently-close-to-where-hunger-strikes-but-bland eatery, but don’t). And one that can stand in, with some panache, as a showcase for Slovakia’s culinary offerings.

You will come across Hradná Hviezda in the stately cream-yellow courtyard buildings immediately on the west side of the castle (the side furthest away from the city centre, in other words). With a name translating as the Castle Star, it’s the sister restaurant of Modra Hviezda (Blue Star) a little further down in the Jewish Quarter near the Clock Museum – but it is the more dazzling of the two sisters. The setting exudes refinement, although inside, whilst the interior is pleasant enough with its walnut wood furniture and chandeliers, this is hardly what impresses. Nor is it the service (although, poised somewhere between the luke-warm and the congenial, the service is more than adequate). No, Hradná Hviezda will only have you planning your next visit back when you taste what it can do (cook well).

Deer and plums go so well together… ©englishmaninslovakia.com

There are seven or eight choices of typical Slovak main courses, and each whets the curiosity (and the palate). The meat, always soft, flavoursome and embellished by rosemary and thyme, is hardest to resist. There is the mangalica (the wild boar that roams in the forests above Bratislava) with a pumpkin sauce and chestnuts – chestnuts being a typical accompaniment to Slovakia’s game-centric meat dishes. There is a rabbit served with paprika sauce and dumplings – rabbit is a common meat for country folks who regularly go out bagging them but in Bratislava it is far rarer, and enhanced here by a combo of traditional Hungarian and Slovak sides, the paprika that sets Hungarian food a-blaze and the dumplings which prop up typical Slovak food. Jeleň (venison) is also offered – with the sauce concocted from Slovakia’s signature fruit, the plum, and a rich, creamy potato puree. But Hradná Hviezda also does a mean strapačky (dumplings with sauerkraut) and one that’s enticingly presented in contrast to the sometimes colourless versions of the dish served up elsewhere.

Presentation (generous portions, yet thoughtfully arranged on the plates) is key with Hradná Hviezda’s food. The chefs clearly know exactly what they are doing. A meal here, consequently, is not cheap (mains are between 13 and 22 Euros, which puts it in a similar price bracket to one of our other favourite city centre Slovak restaurants, Traja Muškietieri).

It would have been nice to wash down the delicious food with a choice of better Slovak beers (only offering Zlaty Bažant and Krušovice, two of the dullest beers in the country, is a definite shortcoming). It’s definitely recommended, therefore, to sample their wine list which in contrast goes overboard to offer a wide variety of Slovak wines. White wines in Slovakia, especially those from the Small Carpathians (Male Karpaty) Wine region, can rival the world’s best, and the dry white from Rulandske, in the Limbach/Pezinok region, is a true delight here.

Perhaps a glass of the latter would have been better paired with their trout… But we have only ever had eyes for Hradná Hviezda’s game. You’ll spend a lot longer than the walk up here takes if you were to keep to the lower reaches of the city centre scouting around to find game that compares to that available in the serendipitously twinkling Castle Star…

GETTING THERE: Directions are the same as for the castle, and this is an easy stroll up from the very centre, but for those with walking difficulties there is trolleybus 203, catch-able from Hodžovo námestie (and get out at the stop conveniently called “Hrad”).

OPENING: 10am-10pm. Sometimes it can be a good idea to book –  as the restaurant caters to tour groups (locals too, but also tour groups).

BEST TIME TO VISIT: Oh, a dark wintry lunchtime when huddling by their cozy fireplace seems pretty much the best thing to do. Hradná Hviezda’s best dishes are the heavy, hearty, wintery kind. And a visit in out of the cold means the perfect excuse to sample one of their oh-so-typically Slovak fruit brandies… mahrulovica (with apricots), borovička (with pears). The list goes on.

NEXT ON THE JOURNEY: From Hradná Hviezda it’s 2km north to another restaurant on a great viewpoint, Kamzík