I ducked in out of the afternoon murk of Obchodná, one of Bratislava’s main shopping streets, the other day, into the convivial warmth of the Martinus Bookstore.  As I slurped a coffee in their street front cafe, watching the trams creak by and perusing my Slovak for Beginners book, I noticed that the menu claimed the establishment I was drinking in was striving to recreate the atmosphere of those Parisian cafes of the 1920s – a platform for animated discussion and creative thought, etcetera. Interesting. But there’s a lot of cafes making claims these days. One stop up on the number 5 tram in the direction of Dubravka, Kava.Bar is perhaps most refreshing because it makes no claims whatsoever. It just quietly goes about serving some of the city’s best coffee, in an unpretentious street corner location on the way up to the castle.

So effortlessly serving coffee that is concocted with skill rather than a “close your eyes, press the button of the expensive Italian machine and hope” approach is not as straightforward as you might imagine. Many times over the last few months, in cities that purport to have a coffeehouse culture far greater than Bratislava’s (Budapest, Vienna) I have been served, with the sombre theatrics of airs-and-graces bow-tied waiters in ornate chandelier-hung surrounds which prepare you for food and drink far better, coffee that is barely acceptable, and that – were it not for the fact that I was in those coffeehouses where you need to behave – is 100% returnable. Kava.Bar brews espressos thick with crema, and macchiatos where the milk enhances the flavour of the coffee rather than concealing the fact it has not been made well enough.

Bratislava’s cafe scene reached a peak probably some time during 2014. The closure of Prešporák that winter brought it down again a few notches. It’s somewhere like Kava.Bar that seems set to get in back to that pinnacle. 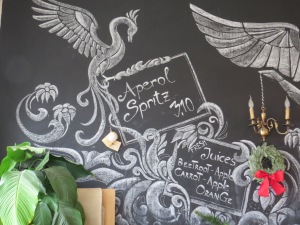 Black-and-white Art Deco-esque tiled floor, big blackboards, displaying intricate sketches and fun messages, championing daily specials, just a cluster of small iron tables but plenty of higher-up window seat perches: Kava.Bar is definitely not about main meals and much more about people watching with a cake, quiche or beverage (they also make really nice tea, plus the joint lends itself well to a glass of good wine in the evening).

It’s not quite designed for lingering like the city’s best cafe of recent years, Prešporák, was. They would certainly never claim their coffee was the equal of Hangout Cafe’s and there’s none of the cafe-for-the-masses feel of Panta Rhei’s Café Dias or the amenable mini coffee chain atmosphere of Stur. Kava.Bar is a proudly independent joint that merely tries to be itself, and does well at it. Its location, on the main route up to Bratislava Castle, will always win it visits (although currently it doesn’t appear to be receiving as many as it deserves). But it has the added merit of having more extensive opening hours than a lot of the other cafes around. I don’t know how they manage to get up so early on Sunday mornings, actually. But I’m very glad they do.

I’m just not sure about the name… it sounds a little too modern. When inside, in fact, kava.bar is much more akin to those Parisian cafes of old that other places wax lyrical about emulating.

LOCATION: Right on the corner of Zamocká and Skalná, just over the dual carriageway from the old town centre.

BEST TIME TO VISIT: A wintry Sunday morning when almost every other good place for coffee is shut.

NEXT ON THE JOURNEY: From Kava.bar it’s a 600m walk southwest to Bratislava Castle, one of the city’s best viewpoints