Around Bratislava – the North: The Pajštún Castle Hike

The sultry weather in Bratislava continues, and the yearning for countryside escapes grows in proportion. So yet again we found ourselves heading out to explore one of the many outdoor adventures in close proximity to the city. This time we were bound for Stupava, 15 km north of the centre, for the hike up to the romantic ruin of Pajštún Castle.

The castle is one of Bratislava region’s best-kept secrets – at least in terms of fortresses. Bratislava’s own castle, or if not Devín Castle, grab all the foreign visitors and leave Pajštún alone and lovely high up in the forests of the Malé Karpaty (Small Carpathians).

There are several ways to get to Pajštún: it’s a hearty five- to six-hour hike from Bratislava through the Mestské Lesy (quickest on the blue trail from Pekna Cesta in Rača, but accessible too via the Marianka pilgrimage route utilising either the yellow trail from Pekna Cesta or the red trail from central Bratislava) or by good paths from both Marianka and the village of Borinka just to the north-east (just a couple of hours’ hiking from these last two).

But we began in Stupava, a town just off the E65 road heading north to Brno. It fancies itself as a separate town but is in reality little more than a commuter satellite of Bratislava. As ever, Englishmaninslovakia went with high hopes, as I’d heard of Stupava’s beautiful town park and wanted to check it out.

In fact, first impressions were good. The town had a church and, yes indeed, a striking chateau, all with a new lick of paint on an attractive cobbled central námestie. But the church was closed (only one old lady hobbling up to inspect the new notices about the just-deceased by the gates), and the chateau is a senior citizen’s home. However, they were very lucky old people, because their copious, lavish, exclusively-for-old-people castle-like abode looked our, from the rear, upon the most beautiful urban park within the Bratislava region. Zámocký Park is by far the superior of Bratislava’s Medicka Záhrada or Horský Park. 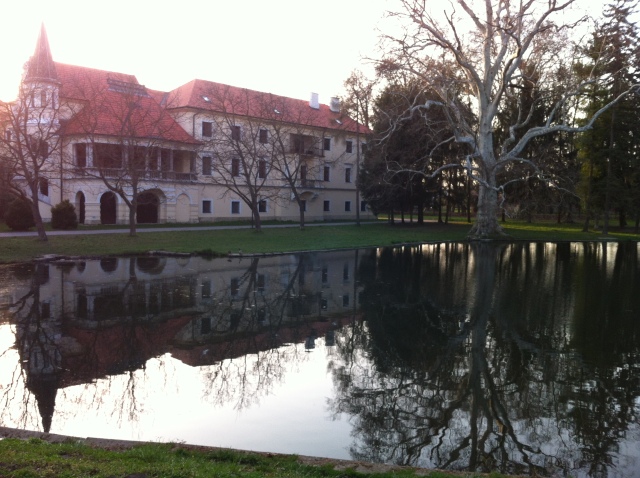 Zamocký Park in Stupava… nice view for the old folks – image by www.englishmaninslovakia.co.uk

The castle-backed lake is flanked by a few examples of Slovakia’s protected trees (nb – I’ll post the name here when I remember it) and a path leads away through manicured grounds in a manner reminiscent of an English country estate to connect up with the trails into the mountains after about 30 minutes’ walk. We took a bit of a shortcut and headed along by car (the next turning right after the park from the main road) to the cross which marks where the Zámocký Park path comes out.

There is parking just before the cross, and it’s a one and a quarter hour walk from here up through woodlands to Pajštún ruins, which you see from below leaning gutturally out of the wooded hills above you. If signs are to be believed, this is a forest where you can bump into the mouflon (big-horned wild sheep). We didn’t see any, but on the quiet paths near the castle we did cross paths with the biggest herd of wild deer I’ve ever seen in my life – at least 15, bounding through the trees just above us. On the way up, there is one point where the yellow-waymarked path veers almost without warning up off what looks like the main track, and the path is steep in places, but generally, head up and you shouldn’t miss the castle. 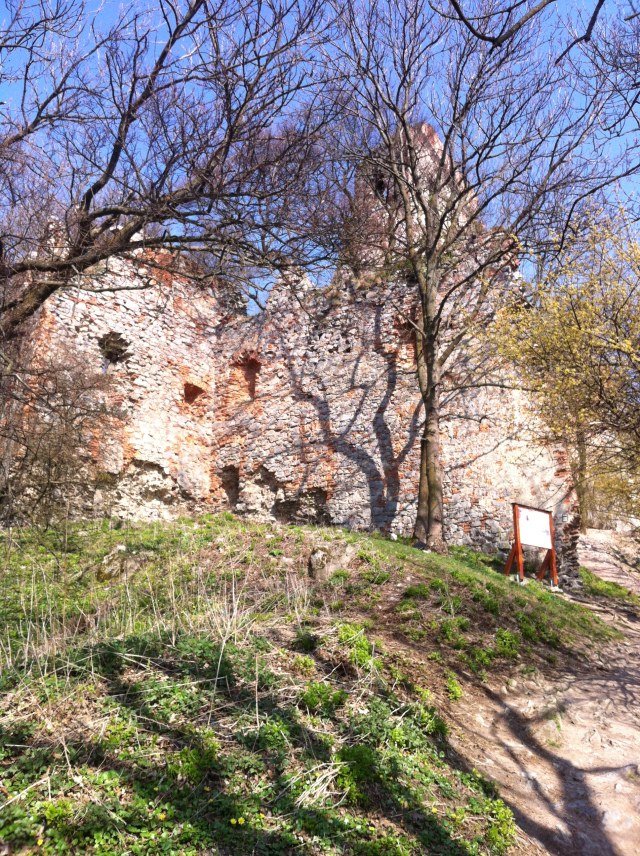 Pajstun Castle appears through the trees

It does appear, at times, as if the castle does not want to be found. It’s so secreted by trees that it only becomes visible right at the last moment. The castle was built in the late 13th century (1287) during a wave of Tartar-Hungarian conflict in the region. Powerful regional families, who invariably had as much power as the official monarch in these war-torn times, didn’t shirk to battle the Crown itself, and the Kösegiovcov family were one such audacious group. As a reward for helping them in battle, Rugerius of Tallesbrau received the very lands on which  Pajštún was then built.

I did a fair amount of oohing and aahing at just what a defensive masterpiece this castle is. Despite being struck by lightening in the 18th century and then blown up by Napoleon in 1809 (what a nasty fellow to blow up an already ruined castle eh?) the castle is still incredibly in tact. It’s so surrounded by trees it’s hard to get an overall perspective picture, but from the shot below you can see just how vast the walls are: mighty enough to have become the Bratislava region’s best (natural) climbing spot! 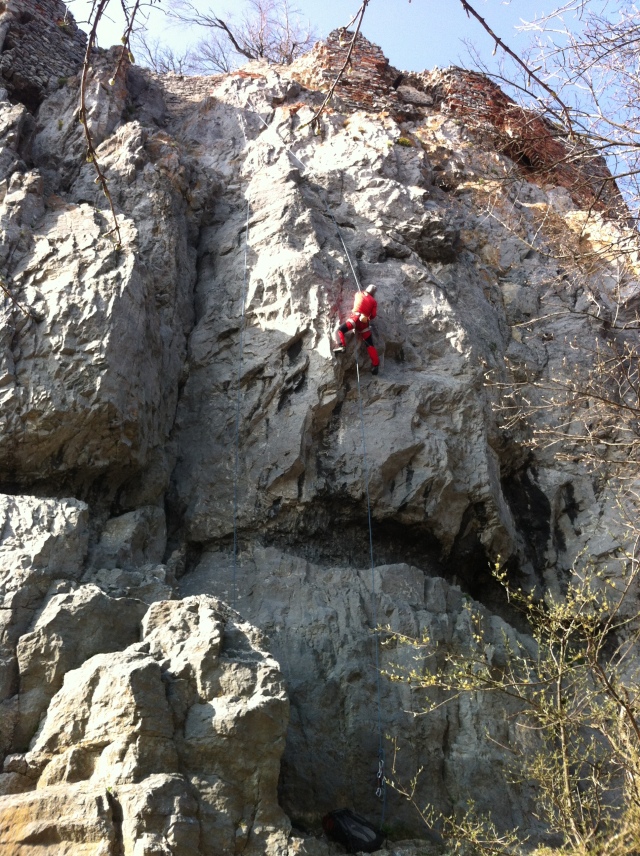 Anyway, this is a great castle to explore, even if you don’t fancy the rather giddying climb up the cliffs of the ramparts to get there. Kids will love the ruins too. There’s great picnicking spots and fabulous views of Stupava, Borinka and, in the distance, Kamzik. In fact, the castle continued to dominate even after its decline, and Borinka was actually known as Predtym Pajštún (the translation of which is something like village under Pajštún) until 1948.

The paths continues on the other side of the castle (if there were few walkers before, on this side of the castle there’s almost none) and loops round on red and blue trails for a further two hours or so back down to the cross and the walk back through the park to Stupava.

The info board below the castle entrance also displays one of those cool Slovak myths – featuring the castle and going something like this: the lady of the castle meets a beggar woman with two children who asks for some food. The lady refuses because she has a fit of jealousy about the beggar-woman’s fertility. The beggar-woman gets irate and puts a curse on her. She will give birth to not one but eight children and endure 16 years of misery to boot. The prophesy comes true. The lady of the castle gives birth to eight children, keeps one and tells some other dignitary/attendant to take the other seven into the woods and kill them. The dignitary/attendant has a change of heart and decides he’ll raise the seven kids himself (they’re all sons by the way). Years pass. All the time the lady of the castle is ruing her decision (well, it was quite harsh).  The time comes when the seven sons are due to celebrate their passage into manhood (by now they’re 16 years old). The dignitary/attendant has kept their survival a secret from the lady of the castle, who is of course invited to the festivities, sees the seven beautiful young men she asked to have killed and repents. They forgive her; everyone lives happily ever after.

NB: Admission to the castle is free and year-round.

GETTING THERE: Slovak Lines run hourly buses to Stupava from Bratislava’s Mlynské Nivy bus station (which is just the other side of Medicka Záhrada in the Nové Mesto/Ružinov area). Marianka, another start-point for the hike to Pajštún, is within the Bratislava public transport zone, and is therefore accessed by city bus 37 from the Most SNP bus station (a bit more convenient to get to). It’s 0.90 Euros to Marianka or 1.50 to Stupava.

NEXT ON THE JOURNEY: From Pajštún it’s 44km northeast to Plavecky Hrad, a feature on our Western Slovakia Castle Tour