Around Bratislava – Petržalka & the South: The Forgotten Banks of the Danube

I’d been shopping, as I remember (not at one of the big malls because I detest them) and fancied a stroll near the city centre. I found myself heading out across Most SNP under the baleful gaze of the UFO and then, where most people would turn left if they wanted a walk/cycle with some greenery along the Danube in the direction of Danubiana Art Gallery, I turned right, passed the few buildings the southern bank of the river has on this side (the outskirts of Petržalka neighbourhood), and then dipped into the river-hugging woods, which continue – in a surprisingly extensive wilderness – all the way into Austria.

First off, ensure you don’t take the path which heads to the left at the end of the paved footpath up a bank to join the main cycle route hereabouts – yours is the muddy little path twisting ahead through the middle of the trees. Initially this is an obvious track – with circles of ashes and charred stumps marking points where groups come to have opekačka (outdoor fires) in summer. The path appears to end at a WW2 bunker, only it doesn’t… it skitters up onto the top of the bunker and continues along a high bank now directly above the water.

RELATED POST: Try Canoeing down the Morava/Danube into Bratislava!

Up until the next bridge upriver 2km away, this is a route, it should be emphasised, to glorify in the little things. A commemorative plaque from the early 20th century etched in German, at a time when Bratislava was most firmly “Pressburg” and German was the default language spoken. Ancient and now abandoned mooring posts for vessels, which for a while I believed were there to demarcate the Slovakia-Austria border because of similar border markers I had seen in the Biele Karpaty on trails marking the boundary with the Czech Republic. Woodsy paths used by no one save the odd mushroom forager, because of the snazzier new international cycleway on the other side of the trees. Neglected miniature sandy beaches (you come to understand just how sandy some stretches of the Danube’s banks can be). It is also one of Bratislava’s cruising spots, and indeed I did pass a couple of male couples as the only other “walkers”, although received no proposition I hasten to add!

And, when you do glimpse civilisation in the form of the E65 main road (you have to head back across the river at this point; there’s no over river crossing now until after Hainburg 20km upriver, although this extension is a fabulous idea if you have a bike, and a picnic, and a couple of hours spare) the vast towers of advertising boards whose feet sit in a jungle of vines in the below-the-road countryside but whose face is destined to spectate on traffic forever.

All in all, it is a walk of the gentle and neglected riverside ilk, where the buzz of the city just a few hundred metres of water away contrasts with the completeness of the silence  – and the tangled root systems and grassy picnicking places. 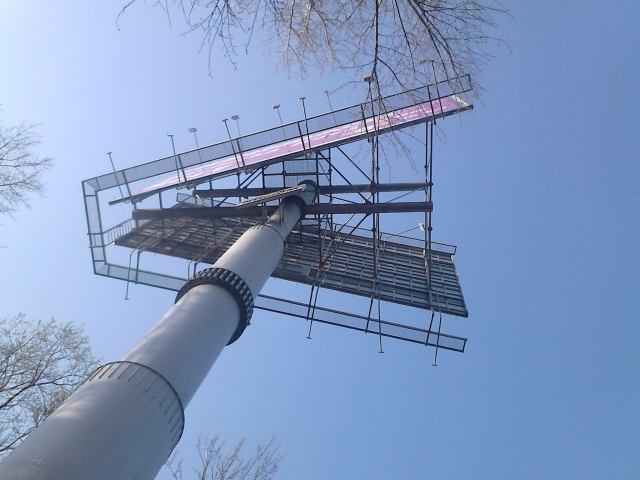 One of Bratislava’s infamous billboards – from below ©www.englishmaninslovakia.co.uk

Head across the afore-mentioned road bridge, Bratislava’s in-favour bungee-jumping spot (there is a pedestrian walkway) to where you meet the edge of Bratislava Botanical Garden (Botanicka záhrada) back under the city side of the bridge (we can’t bring ourselves to dedicate a separate post to the Botanical Garden but it is pleasant enough for a stroll if you find yourself here and is well worth doing at the end of this hike), as indeed is paying a visit to Bratislava Water Museum, aka the Vodárenské Muzeum, right nearby). To get to the nearest public transport from here, follow the road where the big under-bridge car park is up and to the right around the edge of some football pitches to reach the Lafranconi tram stop on the useful number 5 route (please see our Bratislava tram and trolleybus routes post for more).

NEXT ON THE JOURNEY: 9km west along the riverbank from Lafranconi tram stop is Devin Castle – a phenomenal fortress and a starting point for our Štefánikova magistrála hiking trail across the whole of Western Slovakia.

MORE FORGOTTEN DANUBE AROUND BRATISLAVA: In the district of Podunajské Biskupice in south-eastern Bratislava south of Ružinov, it might at first seem that there is very little of note apart from the gargantuan oil refinery of Slovnaft. But if you turn right off road 63 as you head from Podunajské Biskupice to Dunajská Lužná (just after passing Slovnaft) at approximately this point on the map you wind up skirting the refinery that entering a world as pretty as Slovnaft is grim. This is mainly gorgeous woodland replete with snowdrops in early spring that contains a web of hiking (and, even better, cycling) trails along the edge of the Danube on what at this point is the north-eastern bank, on the opposite side of the river from the Danubiana Art Museum.